Bitcoin value breaks previous $18.8K as bears and bulls map out its path

There are both bearish and bullish scenarios for Bitcoin in the foreseeable future. The bear cases surround two key data points: rising BTC deposits from whales to exchanges and BTC’s lack of retests of crucial support levels. The bull cases are based on HODLer activity, address activity, the market capitalization gap between BTC and gold, and the favorable technical structure of Bitcoin.

Bitcoin surpassing $18,500 is critical for its near-term price cycle. There were large sell orders right above $18,500, which acted as a strong resistance area. In prior attempts to break past $18,500, BTC dropped substantially within a short period. This time, it exceeded the resistance level with ease, marking a clean breakout.

The bear case for Bitcoin

Despite the technically strong uptrend of BTC, whale data indicates that the selling pressure on Bitcoin could intensify. Cole Garner, an on-chain analyst, cited CryptoQuant’s Bitcoin Exchange Whale Ratio to say: “It’s likely there’s one more blow off leg left in the tank.” The price of Bitcoin saw a blow-off top on Nov. 18 when it abruptly dropped from $18,476 to $17,214 within two hours. Garner emphasized that the Bitcoin Exchange Whale Ratio has a “history of topping here.”

The price of Bitcoin (BTC) has stabilized above $18,000 as the market demonstrates strong momentum above what was once a heavy multiyear resistance level. On Nov. 20, BTC price hit a new two-year high at $18,828 on Binance, surpassing the previous peak from Nov. 18. Following the breakout of Bitcoin, analysts are divided on its future price trend.

The Bitcoin Exchange Whale ratio is an important metric to gauge selling pressure from whales because it shows the estimate of the amount of BTC that high-net-worth investors are depositing to exchanges. Typically, investors move funds into exchanges when they want to sell. High-net-worth investors prefer to store their funds in noncustodial wallets that they fully control. Hence, analysts track exchange deposits as a potential signal for a sell-off.

Atop the whale data that signals a minor pullback, the monthly chart of Bitcoin shows an overextended upside price movement. Sasha Fleyshman, a trader at the institutional cryptocurrency investment firm Arca, said on Nov. 1 that the $13,716 level is a crucial area. It marked the open and closing prices of the December 2017 and January 2018 candles, when Bitcoin price hit a new all-time high at almost $20,000. Hence, surpassing that level means $13,716 will serve as the major macro support area.

Albeit unlikely, if a deep correction does occur, Fleyshman said that he expects the “palpable” support level at $13,716 “to be the line in the sand support wise to maintain structure.” Whether BTC will see a major correction in the near term still remains uncertain. But in the case of a correction, Fleyshman said BTC has a big support area to defend the ongoing bull run. 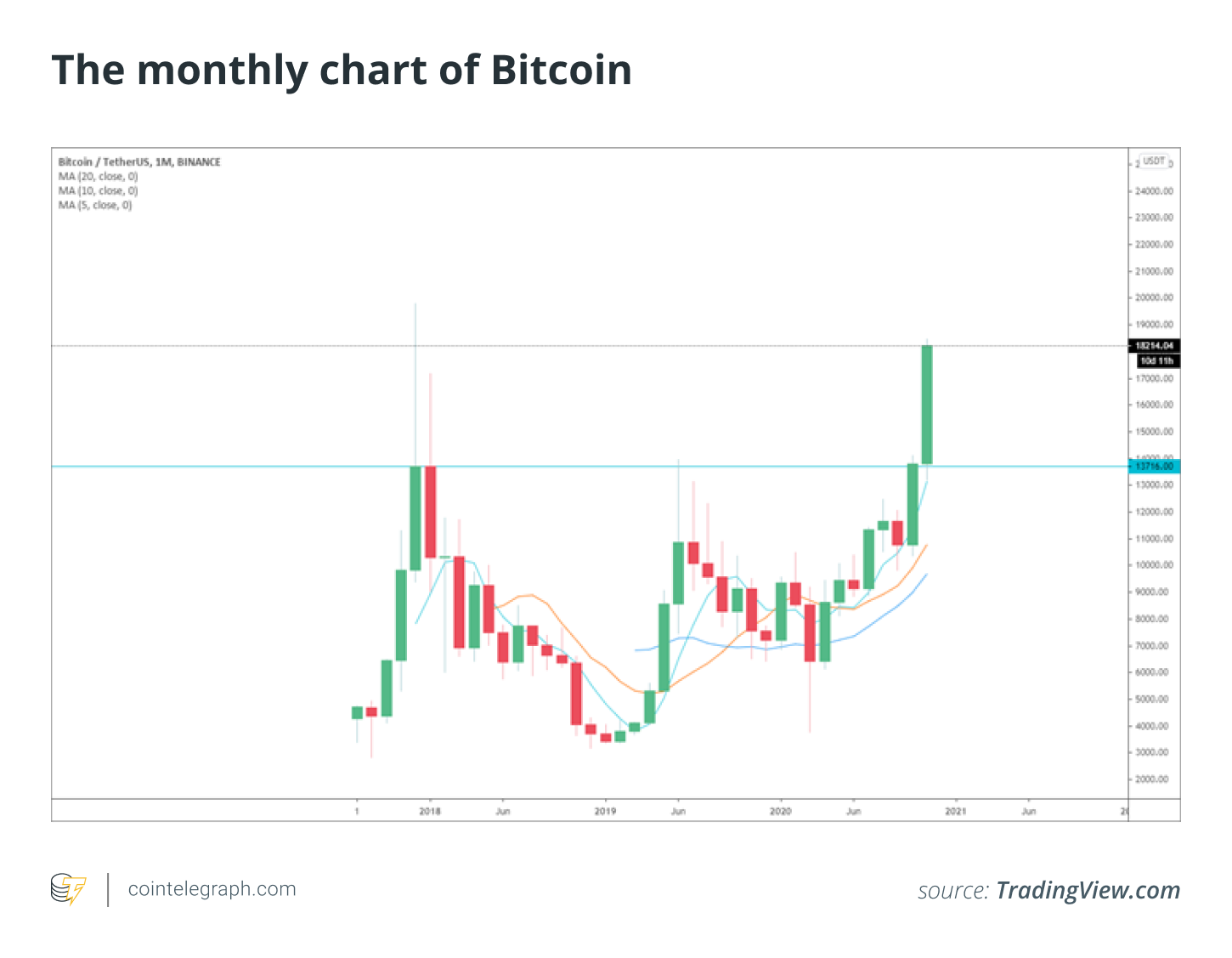 Denis Vinokourov, head of research at crypto exchange and broker BeQuant, told Cointelegraph that similar price drops to the recent abrupt crash have happened before, and the recent dip was met with significant buyer demand. Hence, although BTC saw a major downside movement in a short period, he believes it’s not necessarily bearish:

“Bitcoin’s relentless surge higher came to what some may have misconstrued as an abrupt end. However, while the price swing from $18,500 to $17,200 is certainly not for the faint hearted, similar price swings in dollar terms occurred when Bitcoin was trading at a much lower valuation. In addition to that, the selling pressure was met with similarly aggressive dip buying interest and what’s more is that the aggregate open options interest (OI) is actually higher since the initial dip lower.”

The bull case for BTC

Due to the breakout of Bitcoin above $18,500, analysts have said that the market sentiment around Bitcoin is generally optimistic. Speaking to Cointelegraph, Guy Hirsch, managing director of the United States at eToro, said it would be surprising to see Bitcoin not challenge the all-time high soon. There are many positive narratives — such as the support for BTC from PayPal and Cash App, alongside rising institutional adoption — that brighten the outlook for Bitcoin:

“Sentiment now is rather bullish, and a number of indicators including social media chatter, trade volumes and even web pages indexing marketing terms related to Bitcoin, are at or near all-time highs themselves — these are clear indicators that the appetite for an extended bull run is here; and the increasing adoption coming from all sides — PayPal and CashApp, Anthony Scaramucci’s Skybridge announcing intent to buy Bitcoin and many legendary investors also jumping in.”

While there have been discussions around the high time frame charts of Bitcoin, such as the weekly and monthly charts throughout November, technical analysts have said lower time frame charts also seem optimistic. Before the breakout of Bitcoin above $18,500, a pseudonymous trader known as “Benjamin Blunts” said that BTC left a sideways structure that formed in the previous 48 hours. After the breakout, the trader said this rally “should be the one to take us to $20k and back to all-time highs.”

In addition to the numerous technical and fundamental catalysts for Bitcoin, there is a strong argument to support an exponential growth trajectory for BTC in the long term. Mike McGlone, a senior commodity strategist at Bloomberg Intelligence, said that at a market cap of just $300 billion, Bitcoin is far from reaching gold’s $10 trillion market cap. But, this also shows that there is a large valuation gap between Bitcoin and gold: “Bitcoin is on track to be a digital version of #gold, but remains far from it in 2020.” 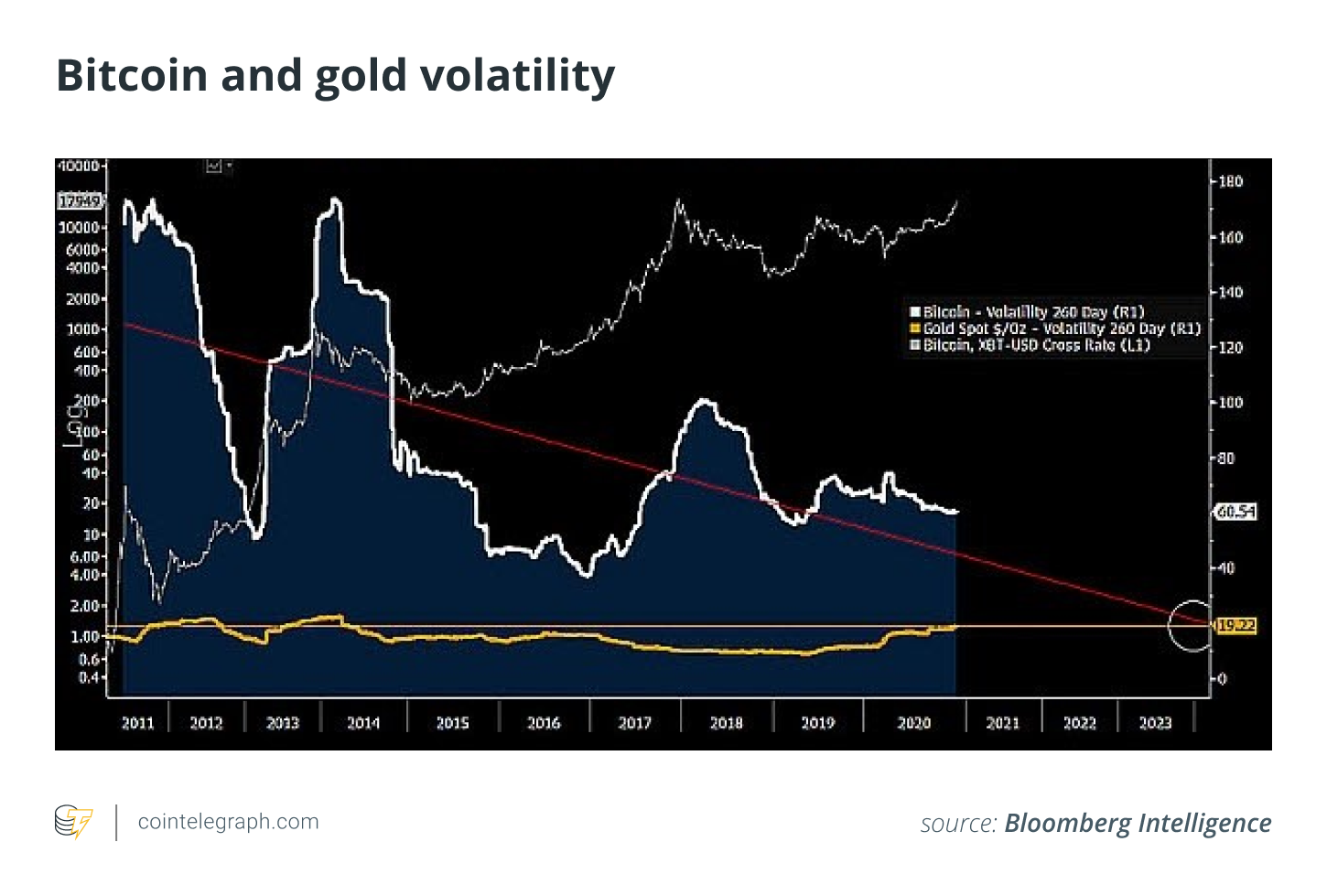 The next ceiling for BTC?

Considering various trends Bitcoin has seen in the eight months since the March crash, Hirsch told Cointelegraph that there is a high probability Bitcoin will test $25,000. If Bitcoin breaks past $20,000, it would mean that BTC will look to explore a new ceiling. Hirsch has pinpointed the $25,000–$30,000 range as the potential top for Bitcoin in the near term:

“Should Bitcoin surpass $20,000, there is little to suggest that we wouldn’t make a run at $25,000 before the year is out. Though I would shy away from planting a flag in the ground and making a price prediction per se, the fundamentals behind the number of people who now have access to Bitcoin through apps like PayPal and can purchase it with very little barrier to entry suggests that even if a fraction of those people do so, the price has nowhere to go but up.”

However, when Bitcoin surpasses $20,000, there is no longer any historical context to predict the next move of BTC. Hence, above the current all-time high, it’s nearly impossible to predict BTC’s next top until it peaks at a certain level. Another variable is that retail investors are likely to enter after BTC breaks past $20,000, which would add to the high level of interest and fear of missing out, or FOMO, that the cryptocurrency market is already seeing.